Announcement by the Bridesville Women’s Institute

The Bridesville Women’s Institute is sponsoring the 27th Annual Christmas Craft Fair to be held at the Rock Creek Pavilion on Saturday, December 5th from to .

Should Canadian Soldiers Be In Afghanistan?

Are the reasons we are there really believable?

Posted by Michael at 9:10 AM No comments:

We didn't make God. Yet often we become upset if He doesn't move life along in the way we would like.
Posted by Michael at 9:03 AM No comments:

From The Wall Street Journal

The scientific community is buzzing over thousands of emails and documents — posted on the Internet last week after being hacked from a prominent climate-change research center — that some say raise ethical questions about a group of scientists who contend humans are responsible for global warming.
The correspondence between dozens of climate-change researchers, including many in the US, illustrates bitter feelings among those who believe human activities cause global warming toward rivals who argue that the link between humans and climate change remains uncertain.
Some emails also refer to efforts by scientists who believe man is causing global warming to exclude contrary views from important scientific publications.
"This is horrible," said Pat Michaels, a climate scientist at the Cato Institute in Washington who is mentioned negatively in the emails. "This is what everyone feared. Over the years, it has become increasingly difficult for anyone who does not view global warming as an end-of-the-world issue to publish papers. This isn't questionable practice, this is unethical."
Posted by Michael at 8:55 AM No comments:

Marketplace ... Too Much Money

Some economists are worried the world's central banks have created new asset bubbles by flooding the big financial institutions with cash. They fear the banks are back to their risky gambling habits in pursuit of the most attractive financial returns.

The plentiful cash has not just been pumping up Wall Street. Bloomberg News reports that several Asian countries are worried international investors might be artificially inflating their currencies.

In , real-estate speculators are still building skyscrapers, even in the face of a 50 percent vacancy rate. Critics say it shows central banks around the world need to start putting the brakes on.

Thirty-four years after taxpayers spent more than $55 million building the Pontiac Silverdome, city officials have auctioned it off to the highest bidder for $500,000.

The 80,000-seat sport arena came complete with contents and the land surrounding it. To build the same stadium today would cost $200 million.

Posted by Michael at 2:22 PM No comments:

Renee Rippchen works for BioEnergy Solutions. Her company is selling what they casually refer to as "poo power." And they make that power by capturing the methane gas from cow manure, cleaning it up, and feeding it directly into PG&E's natural-gas pipelines.

Rippchen says, "So one average Holstein will produce around 120 pounds of manure every day. And so we can capture the gas from those cows, and it takes basically two cows to power one average California home."

Posted by Michael at 2:16 PM No comments:

Two and half billion people world-wide do not have toilets.
Posted by Michael at 2:10 PM No comments:

Voltaire once proclaimed, "In 100 years the Bible will be forgotten and eliminated".
Twenty years after his death the Geneva Bible Society bought his former home and used it for printing Bibles. It later became the headquarters for the British and Foreign Bible Society. For several years they distributed hundreds of thousands of Bibles world-wide, thus Voltaire's home become a major distribution hub for the very scriptures he assigned to extinction.
Voltaire's chateau is now owned and administered by the French Ministry of Culture.
Posted by Michael at 2:05 PM No comments:

I don’t believe that there is a climate catastrophe; I don’t use the word chaos or disaster to describe the present changes in climate, which are well within natural variations that have occurred in the past history of the earth.
- Dr. Patrick Moore,
Founder of Greenpeace
Posted by Michael at 11:22 AM No comments:

Director of the movie ‘Not Evil Just Wrong’ Phelim McAleer says “The well-financed environmental groups hyping global warming don’t want people to see this movie because we clearly expose the overblown rhetoric and false claims behind their environmental doomsday predictions.”

Both he and the co-producer of the film, his wife Ann McElhinney, have received several death threats.

“The environmental extremists don’t want a debate; they don’t want a reasoned discussion about climate change. Instead, they put all their efforts into trying to shutdown anyone who disagrees with their agenda,” McElhinney adds.

So Many People Just Don't Want To Know

Are you
awake
to what is
happening?
Posted by Michael at 3:57 PM No comments:

I just doesn’t understand how come when you are following behind a car with all the new fangled pollution control-stuff on it, that it stinks worse than the cars that don’t have that new stuff. That don’t make no sense. Gollee, it is putrid.

Did you ever notice that when some politicians get elected that within a few months they grow bigger and bigger? Must be that all that tax-payer paid-food is fattening! I notice that even the reporters that hang out with fat politicians soon get way bigger too!

I got me another question too. How come you have to wait and wait to get an MRI scan with BC Health, but you can go down the street and get one almost right away in a private clinic? What gives with that? The government seems to have a hard time sailing big ships like Health Care efficiently.

Speaking of big ships, whatever happened to that BC Ferry sinking in March of ’06? No doubt the ship ran smack into an island and was worth hundreds of millions of dollars and two people died when it sank in less than an hour, but I never heard much from the people that were on the bridge at the time. They just clammed up about the whole thing. Sure BC Ferries fired them, but I thinks they should have to come clean and ‘fess up to what really happened. How did we get ourselves into a world where no one is accountable no more, especially in a big thing like that?

Tell me what happened in the ! They borrowed billions of dollars, even trillions, to fix the financial mess and it is still a mess, only now the country is in much bigger debt for generations to come.

The banks that were “too big” to let fail have grown bigger than they were before this whole fiasco began. That don’t seem right.

Do you think some people robbed the citizens?

‘Til next time. Farewell.

Posted by Michael at 1:09 PM No comments:

In Florida, a group of ‘’amnesty-for all-immigrants” marched noisily, chanting that all who opposed them are racists.

Some people from the grass-roots “Tea Party” took some video of the march and then found themselves attacked.

In the “Cash For Clunkers” program the top three cars junked by the public were:

The top three resulting purchases were:

Posted by Michael at 3:31 PM No comments:

One of Greenwood’s two ball diamonds has inherited a small crater, presumably the result of it being the blasting platform for the Halloween fireworks.
Besides it being a nasty disfigurement and scar, hundreds of pieces of paper and cardboard litter the spot, as well as many casings from the firing devices.
Over the past 15 days the wind has scattered much of it further afield and the winter snow will no doubt begin the long process of natural decomposition, as much as cardboard and coloured paper will allow.
An enterprising ball player, combined with a lawyer, might find the new hole and uneven ground in shallow left-field a wonderful opportunity for a profitable lawsuit. 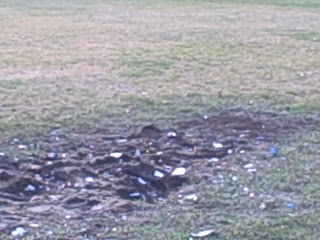 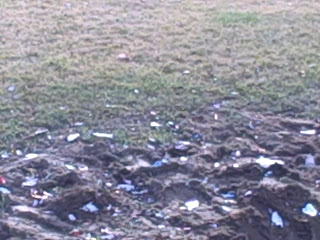 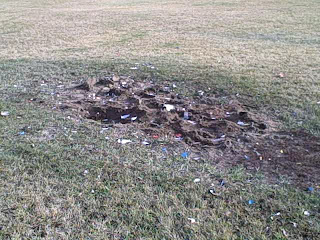 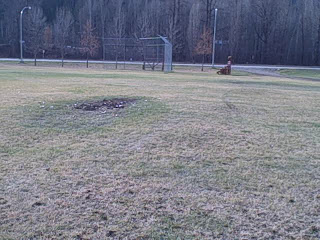 Posted by Michael at 3:22 PM No comments: