The Memorandum of Offering has been released for the Midway Mill. The details within it were discussed with potential investors this week in Midway, Rock Creek and Greenwood.
People interested in investing can contact Mayor Randy Kappes at 250-449-8252.
Full Story >>> http://www.bclocalnews.com/kootenay_rockies/grandforksgazette/news/112731129.html
Posted by Michael at 10:03 PM No comments:

With a nod to the Tea Party, the Republicans taking over the House of Representatives next week will read the Constitution aloud, in its entirety. It's something that has never been done in the chamber's 221-year history. Many in the Tea Party feel Congress has strayed far from the country's founding principles.
Posted by Michael at 10:10 AM No comments:

Outer View
By Old Willy Longbeard
WillyLongbeard@boundaryfreepress.com
I done read in the paper this morning a story that said, “The Obama administration is expressing alarm over reports that thousands of political separatists and captured Taliban insurgents have disappeared into the hands of Pakistan’s police and security forces.”
Well now, that be the strangest thing. The president’s alarm clock goes off over something like that, but he regularly sends those drone airplane things up in the air and zaps hundreds of people dead with them and no alarms go off then.
I thinks he’s got some strange alarm clocks.
Posted by Michael at 8:58 AM No comments:

Conversations Heard Around The Area

A locally run old-age care home, aided greatly by volunteer help, has had its financial situation tossed into tatterland by the entrance of an “outside the community” union.
Another local municipality has buried a new water line in a residential section of town. The workers are now scurrying around like ground-hogs digging up the streets and alleys again, in bits and pieces, as the Chinese-made pipe keeps springing new leaks.
Posted by Michael at 10:44 AM No comments:

Deepwater Horizon should have weathered the blowout. This is the story of how and why it didn’t.
Interviews, sworn testimony and statements from crew members show that the oil rig should have weathered the well blowout, but it didn't because every one of its defenses failed.
Full Story >>> http://www.nytimes.com/2010/12/26/us/26spill.html?nl=todaysheadlines&emc=a2
Posted by Michael at 11:20 AM No comments:

In 2000, the average European Union subsidy for a European cow was $913.The EU aid for an individual human being in sub-Sahara Africa was $8 per head.
Posted by Michael at 2:24 PM No comments:

The Transportation Security Administration is investigating a California-based pilot for revealing a gap that allows airport and airline maintenance workers to access secured areas.
Full Story >>> http://www.wnd.com/?pageId=243109
Posted by Michael at 6:29 PM No comments:

Oroville Cheese A Bit Too Organic

After samples of Sally Jackson Cheese tested positive for E. coli, confirming that it was the source of an outbreak that sickened eight people in four states, the Oroville, WA. cheesemaker announced she was going out of business.
Full Story >>> http://www.foodsafetynews.com/2010/12/whole-foods-recalls-sally-jackson-cheese/
Posted by Michael at 11:01 AM No comments:

Tim King is owner of the oil-seed crushing equipment that was delivered starting in September. Since that time, three different trucking companies were utilized to get his equipment brought down from Canada, where he bought it for a steal.
Full Story >>> http://www.examiner.com/environmental-policy-in-national/oroville-seed-crushing-plant-soon-to-become-operational
Posted by Michael at 8:29 AM No comments:

I feel so much more confident that the TSA's nude photos of airline passengers will never be released now that I know the government couldn't even prevent half a million classified national security documents from being posted on WikiLeaks.
Posted by Michael at 9:10 AM No comments:

Ron Paul Comes In From The Cold

As virtually all of Washington was declaring WikiLeaks’s disclosures of secret diplomatic cables an act of treason, Representative Ron Paul was applauding the organization for exposing the United States’ “delusional foreign policy.
Full Story >>> http://www.nytimes.com/2010/12/13/us/politics/13paul.html?_r=1&nl=todaysheadlines&emc=a2
Posted by Michael at 7:17 AM No comments:

Leonard William Furman was arrested in Greenwood yesterday afternoon by the Kootenay Boundary Regional Detachment for Uttering Counterfeit Currency.
39-year old Furman has been charged with 12 counts of Uttering Counterfeit U.S. $50 bills and ...
Full Story >>> http://www.kbsradio.ca/News/Story.aspx?ID=1325696
Posted by Michael at 1:41 PM No comments:

At a White House gathering for the new governors, Governor-Elect Haley confronted Mr. Obama and asked him to repeal Obamacare. Obama refused so Haley said she wanted an opt-out for South Carolina.
What is more awesome is that she demanded a refund to the state of money used to build the Yucca Mountain nuclear storage facility.
Full Story >>> http://www.redstate.com/erick/2010/12/03/why-governors-matter-nikki-haley-takes-on-barack-obama/
Posted by Michael at 4:58 PM No comments: 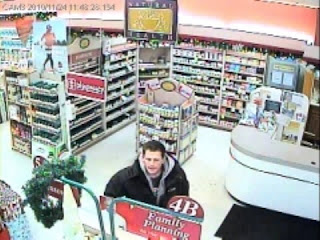 Full Story >>> http://castlegarsource.com/news/crime/rcmp-release-photo-suspect-counterfeit-investigation-8729
Posted by Michael at 9:08 AM No comments:

In 2008, the US military shipped out of Iraq -- on 37 flights in 3,500 barrels -- what The Associated Press called "the last major remnant of Saddam Hussein's nuclear program": 550 metric tons of the supposedly nonexistent yellowcake.
Full Story >>> http://www.realclearpolitics.com/articles/2010/12/09/the_wikileaks_vindication_of_george_w_bush_108195.html
Posted by Michael at 10:40 AM No comments:

Activists raised retaliatory attacks upon the Websites of multinational companies hostile to the WikiLeaks.
WikiLeaks found their funding channels at PayPal, Visa and MasterCard and other institutions severed. They also lost web hosting capabilities from different internet servers and such places as Amazon.
The attacks crippled and staggered many of its victims.
Full Story >>> http://www.nytimes.com/2010/12/09/world/09wiki.html?nl=todaysheadlines&emc=a2

Putting Our Size In Perspective

There are times when we think too highly of ourselves. Perhaps there are even times when we think we are god in our own life.
Sometimes it is good to look at the bigger picture of God’s spoken creation and put our size into a bit of perspective!
Current data informs us that the visible universe contains an estimated 100 billion galaxies, each with a diameter millions of trillions of miles wide, and with each galaxy containing hundreds of billions of stars.
The universe is home to more than a billion trillion stars.
If one circled the earth seven times in one second, it would require at least 28 billion years to cross the universe at the same speed.
Our sun heats the earth and creates all the energy that drives our weather systems with only one-billionth of its energy.
One million earths would fit inside our sun.
The largest known star, VY Canis Majoris, can accommodate 9,200,000,000 of our suns.

Not A Good Balance

The United States government borrows 40 cents for every dollar it spends.
Posted by Michael at 2:27 PM No comments:

People that hold power are very indignant about WikiLeaks.
They vilify their release and those associated with them.
Those well-paid noisemakers aside, it is refreshing to get raw information that is not controlled or manufactured by governments or their accomplices.
The WikiLeaks revelations also awaken a few questions. Why do governments ever have secrets? Ever? Why aren’t they open, transparent and honest all the time? Did the common people elect their representatives to keep secrets from them, to hold matters close and guarded? Why aren’t they just open and honest all the time?
People who have nothing to hide are not worried about being exposed.
Only those that deliberately live in darkness are afraid of the light.
Posted by Michael at 10:59 AM No comments:

Shaw Communications says it will likely be two or three years from now before the Greenwood and Midway areas will see cable telephone service available.
Posted by Michael at 10:55 AM No comments:

The United Kingdom exports more to Ireland than they do to Brazil, Russia, China and India together.
Posted by Michael at 10:53 AM No comments:

Thousands of Israeli rescuers and firemen backed by fire crews from around the globe battled on Friday to conquer the biggest inferno in Israel's history, which has already killed 41 people.
Officials said most of the dead were prison guards on board a bus, who had been trying to evacuate inmates from a facility in the forest.

Full Story >>> http://www.vancouversun.com/news/Thousands+battle+Israel+worst+ever+fire+toll+hits/3923758/story.html
Posted by Michael at 10:38 AM No comments:

Here's a solution to all the controversy over full-body scanners at the airports:
All we need to do is develop a booth that you can step into that will not X-ray you, but will detonate any explosive device you may have hidden on or in your body. The explosion will be contained within the sealed booth.
This would be a win-win for everyone. There would be no racial profiling and the device would eliminate long and expensive trials. This is so simple it's brilliant!
One can see it now: you're in the airport terminal and you hear a muffled explosion. Shortly thereafter an announcement comes over the PA system, "Attention standby passengers, we now have a seat available on flight number such and such!
Posted by Michael at 2:42 PM No comments: