In Search Of The Town Square

My right leg won’t lift. The right arm is very crippled. I can drive fine (adapted the car), but getting to where I am going after arrival is a varied challenge.

But where is the town square in Greenwood? After 118 years of existence, surely Greenwood has developed a town square.

Perhaps it’s hiding. Perhaps different people have different versions of what a town square is. Personally, I envision an open space, away some from traffic, a place with a little opening for children to run, a place with lots of places to sit, a place perhaps with some humble food market stands and a place with the community bulletin board. A place where people meet and chat about the news of the day. Maybe a place where now and then special events take place. (Like public hangings, though we don’t such things anymore. Now we do character assassinations through online postings. It may appear to be more civil but can be almost as deadly, though some say far more cowardly.)

Where is that elusive town square?
I decided to go looking for it. The first place I stopped was not my intended destination.

The Lion’s Park was the goal for a starting point, but on the way I passed the ball park. (It has a fancier name now. Politicians like to name things after themselves, their friends or whomever or whatever is currently popular, but to me it is still the ball park. For decades it didn’t need a name and it still doesn’t.)

The ball park caught my attention partly because of the new building, dugouts and bleachers, but mostly because the lone picnic table in front of the concession stand looked so inviting. 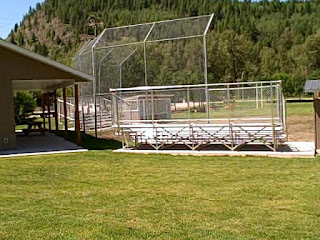 I parked on N. Kimberley. It was much harder than I thought to drag myself to the first base line. It took almost five minutes.

To my surprise I couldn’t make it to the top seat in the bleachers to see the view. I thought there would be an aisle-way with a railing along one side, but there was not. One has to climb over each individual row of seats to gain altitude and I couldn’t do that. So that plan became cancelled. 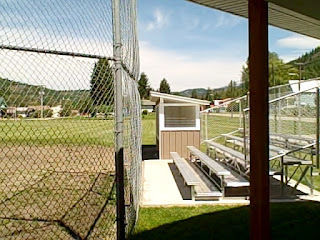 Instead, I shuffled over to the dug-out and peeked inside. There were several empty drink containers scattered about on the bench and floor. This was sad, but upon thinking on that, there has been a garbage can absence in this ball park for most of the last 13 years.

Finally, I headed for my destination --- the picnic table! This too was a hard slog. The backstop became my friend! I could hang on to the wire fence as I inched my way along it. As I slowly proceeded, looking into the fence all the while, I wondered if that fence was symbolic.

Are we all trapped inside a fence? 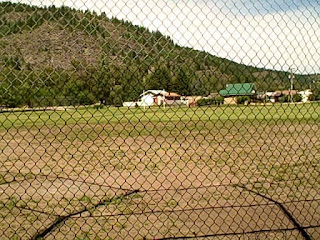 Are we in bondage to a plethora of by-laws? Greenwood’s web page, under the city info tab, greets you with 58 by-laws. Many of the by-laws callously state that a city official may enter your property at any time within reasonable hours. It doesn’t state what is reasonable or give any allowance for prior notice of the intrusion. Such are the thoughts that a fence brings as one struggles along.

Then enter the thoughts of the large number of secret council meetings held behind closed doors with no public participation or accountability in which sometimes payments of undisclosed amounts of money are paid in secret and people find termination without a public reason given. One can easily wonder if there are different rules for different folks depending on which side of the fence you live.

Arriving at the picnic table there is one more obstacle. The table in front of the concession stand sits on a large concrete slab. It is only an inch above the ground, but I can’t lift my leg even that much. Thankfully there is a wooden support beam there that I am able to use as leverage to pull myself up. 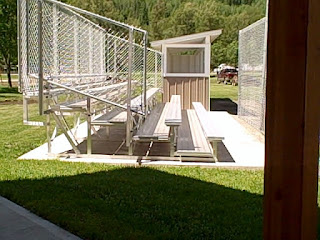 Looking around, it is peaceful here, and very green; a pleasant place to be. But there are no people! There has been almost no one here all summer!

Across the way is the other ball diamond. There once were places to sit there too, but they have vanished; perhaps they ran away with the garbage can!

This certainly isn't the town square. It could be though. And a very fine one. It would only need a few adjustments: not many. There is great potential here. It would need the will of the people and a doer! Or perhaps that could be reversed. It would take the will of a doer; the people would just come.