Mr. B received a call from his neighbour on Hulme Creek Road that the Rock Creek fire was coming up the hill and threatening his home.

Mr. B went to assist with his pick-up and loaded water tank.

After battling for a while, very efficient fire bombers flew in and took over.

No longer having electricity for water pumps on the road, Mr. B decided to go down to the highway and travel west one kilometer and re-fill his tank at a neighbour’s. On the way he offered refreshment to the firefighters on the highway.

Upon returning to Hulme Creek Road he was blocked and informed by the Environment Police (officially known as Conservation Officers) that he was not permitted on Hulme Creek Road; it was an evacuation area.

Mr. B explained that he was fighting the fire, that his home was in danger and he had just gone to get more water.

The Environment Police would hear none of it and remained adamant that he would not be getting onto Hulme Creek Road.

Another neighbour, whose house was in far more serious danger, also tried to enter onto Hulme Creek Road at the same time, but was met with the same obstinance.

The situation appeared to be heading into a state of mass inflammation and ugliness as protocol was trying to prevail over people, and regulation was trying to rule over the rights of people to save their homes. To the common man it seemed insanity.

The two blocked men, however, handled it in typical Rock Creek fashion. They left the two over-paid zealots stewing with their inflexible rules and proceeded west to Conkle Lake Road and travelled up to around the 13-km marker. From there they travelled on a narrow, seldom used trail that threaded its way over to Hulme Creek the back way.

Back on their home turf, they fought the fire for two days with many others and saved much. 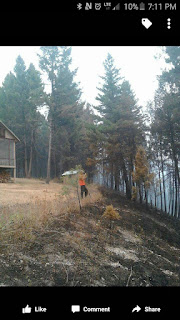 Rock Creek residents have a history of not wanting government regulation in their lives, particularly when the rules are cumbersome and idiotic.

Sometimes they think it is better to turn their backs on the government and just “shoot, shovel and shut-up”.

Some call the ones that fought behind the evacuation lines “rebels”.


Others might call the armed gunman authorities that tried to prevent people from saving their own homes the real criminals, even if they are “legal” ones.
Posted by Michael at 3:49 PM