America’s police state obsession with submit and be searched is out of control, and sometimes ludicrous.
The difference between a 1955 border crossing into Communist East Germany and a 2015 border crossing into the US is not much different.
Both countries built a great wall around themselves in more than one way.
When East Germans were asked if they would like to be free, they often responded with, “What do you mean? We are free.”
Many Americans will say the same thing today. 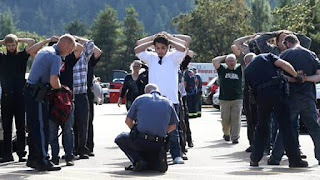